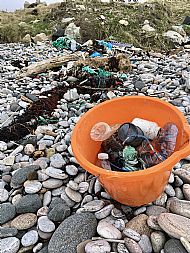 With help from The Pebble Trust, Surfers Against Sewage were able to recruit 2 new Regional Volunteers (or ‘Reps’) to the Highlands and Islands. Although they have not yet met their target of 20 Reps for Scotland they continue to work hard in Scotland to increase their presence and this year this has largely been through their Plastic Free Communities project.

Surfers Against Sewage Reps organised 58 official beach cleans in Scotland during the Big Spring Beach Clean and the Autumn Beach and River Clean, although many more unofficial cleans took place throughout the year. What was most encouraging was the numbers of volunteers in Scotland who took part – 5,249, up from 1,207 in 2017. What was also staggering was the amount of marine litter they removed – 10.3 tonnes, up from 3.2 tonnes in 2017.

Another key area is education in schools. Knowing that pupils are passionate about the environment, this year they signed up 25 Scottish schools to their Plastic Free Schools programme.

Keep up the good work!

The road from Paris to Glasgow is through the farm gate!Old and Cold – what can be done?Looking to the future with the Highland Good Food Conversation
Pebble Trust Blog
Subscribe