Congratulations to young film-maker Elizabeth Penman, who has just received Pebble Trust funding for a film project whose goal is to engage, educate and inspire young people in Scotland to care about our wildlife, 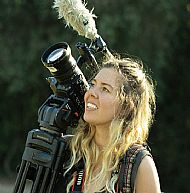 Elizabeth explains: ""With the rise of the Greta Thunberg generation we can see that young people are eager to lead the charge. This film will provide them with invaluable insight on how they can further their activism by documenting and sharing their work and stories."

Elizabeth will be leading the audience through the story, asking the questions they want to know to leading scientific experts. The project will follow through with screenings and events at schools, universities and colleges.

Here's an example of Elizabeth's work - this has been shown in schools across Scotland and will be broadcast on the BBC later this year. And you can find out more about Elizabeth's work. The project will be supported by producer Alex Porter-Smith.

The road from Paris to Glasgow is through the farm gate!Old and Cold – what can be done?Looking to the future with the Highland Good Food Conversation
Pebble Trust Blog
Subscribe