NH&I Climate Action Hub - who are they and how to find out moreReflections from COP26So you want to shoot animals?The power of community sharingThe road from Paris to Glasgow is through the farm gate!Index

Bring back the fish - Bring back Scotland's inshore limit 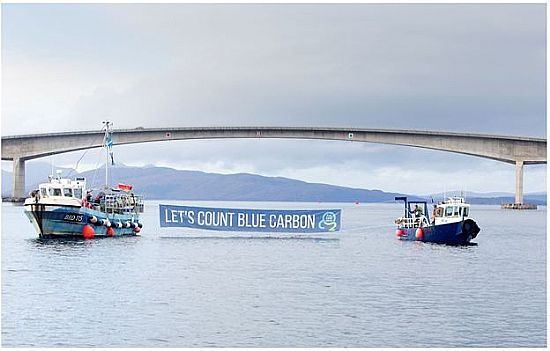 Our Seas is a growing coalition of 128 coastal businesses, fishermen's organisations, community groups, fisheries trusts and eNGOs, campaigning for an urgent overhaul in the way Scotland’s inshore fisheries are managed. Scotland's waters have supported coastal communities for thousands of years, and in addition to hosting myriad and abundant life, our inshore seabed habitats like maerl, kelp, and seagrass are vital coastal protectors and carbon sinks; coastal marine mud alone absorbs more carbon than all of Scotland’s forestry and peat bogs combined, yet over recent decades our inshore waters have been terribly mismanaged, to the detriment of the environment, and the communities that rely on them.

Until 1984 we had a ‘three mile limit’ around Scotland’s coast which had been implemented almost 100 years before, because it was apparent that bottom trawling - which was becoming increasingly industrialised at that time - was having a detrimental impact on fish stocks. The removal of this limit, in conjunction with the expansion of scallop dredging, resulted in the wholesale devastation of inshore habitats, biodiversity and fisheries. The fish stocks which Scotland was famed for quickly crashed, and to this day the vast majority of our inshore fishermen are almost entirely dependent on the shellfish to make a living.

It is widely accepted that scallop dredging and prawn trawling are the most damaging forms of fishing taking place in Scotland in terms of their collateral damage to non-target species, yet little is being done to manage them. Our government often states that we have 37% Marine Protected Areas, yet designation means nothing without protective measures being put in place. The fact is that less than 5% of our inshore seabed has legal protection from trawling and dredging.

Fisheries closures in small areas will not work without a transition to low impact fisheries through out the inshore; they only serve to increase fishing pressure elsewhere. The most effective way to protect blue carbon sinks and recover lost biodiversity is via the urgent reinstatement of a coastal limit on bottom trawling and dredging. We have more selective, less damaging ways of fishing in creeling and diving, they employ more people, incur less bycatch, generate less carbon, disturb the seafloor less and so release less carbon from the seabed. Studies and pilot schemes show that banning trawling and dredging creates more jobs as biodiversity recovers, allowing low impact fisheries to take place alongside a recovering environment.

It can be hard to raise awareness of this crisis as much of the damage is hidden. One of the most effective ways for us to get the message across is via the medium of film, and so we are incredibly grateful to have received funding from The Pebble Trust to make a short film highlighting this issue. We are delighted to be premiering the film in March, and it will be available to all later in the month on youtube.

For more information on Our Seas and to sign our petition please visit www.ourseas.scot or email info@ourseas.scot

A huge thank you to Ailsa McLellan of Our Seas for this month’s blog post.