Bring back the fish - Bring back Scotland's inshore limitNH&I Climate Action Hub - who are they and how to find out moreSo you want to shoot animals?The power of community sharingThe road from Paris to Glasgow is through the farm gate!Index

We meandered down the A9, passing towns, villages, woodlands, fields and grouse moors, and I was able to take all of it in with a significantly large window in front of me. Front seats on the top deck of the Megabus: I was pleased. It's a 3.5-hour journey from Inverness to Glasgow, and I had lots of time to think.

My thoughts wandered as I thought of this moment: COP26 in Glasgow. Years of campaigning in Scotland on climate action and I still didn’t think this was really happening. I still didn’t know if it would bring about any change. I still didn’t trust those in power.

I became so wrapped up in thinking about the next two weeks I jerked as the bus rocked around the Broxden roundabout at Perth. Then, as we pulled into the car park, I caught a glimpse of a man sitting with a sleeping bag draped over him, taking shelter by a boarded-up building. He looked cold. It was a stark reminder that justice must be at the root of climate action; everyone has to be included in this transition. 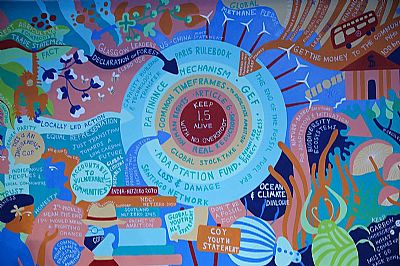 I arrived in Glasgow, and it felt strangely peaceful at first. This was something I hadn't expected: people were milling about their day; Buchanan Street was full of shoppers; pigeons pecked at empty crisp packets.

As I walked closer to the Clyde, I suddenly encountered hundreds of police. Their hi-vis jackets clashed against the tarmac road on which they stood. It was surprisingly silent —with the expectation of protest chants and drums replaced by the hum of the passing traffic on the M8 and the occasional muffle of police radios. I quickly got the feeling that the next few days would be teetering on a fuzzy line of contradictions: silence with noise, peaceful protests with police presence, inclusivity with inaccessibility, overwhelm with underwhelm, big statements with little action.

This feeling persists. It has been over a month since COP26 took place and it's fair to say that some positive things came from it, but I don’t think they really came from inside the Blue Zone; not where there were 503 members from fossil fuel companies taking the seats of delegates from some of the most affected nations. The positives came from the streets. They came from the workshops and rooms and pubs around Glasgow. They came from conversations over coffee. They came from the angry, the hopeful and the persistent.

My reflections from those two weeks aren't peppered with huge headlines to end deforestation by 2030 or to cut methane emissions or the phasing out of coal. These are significant commitments, but they simply scratch the surface. They are the tip of the metaphoric iceberg that faces us. My reflections, instead, are speckled by segments of hope as I remember being in a crowd of people in George Square watching incredible youth climate activists take the stage. My optimism is fuelled by seeing young Indigenous women leading the #FridaysforFuture march, taking the space they are owed to speak up for their communities. It’s kept in check by words from Fraser Stewart, a researcher and activist who unashamedly makes calls for climate action to be paired with eradicating poverty and the class system. My hope is ignited and reignited again and again by people who continue to show up.

The (now) ubiquitous phrase on cardboard signs continues to ring true: sea levels are rising, and so are we — and we are louder than ever before.