Bring back the fish - Bring back Scotland's inshore limitNH&I Climate Action Hub - who are they and how to find out moreReflections from COP26So you want to shoot animals?The power of community sharingIndex

Old and Cold – what can be done?

Old and cold - what can be done?

Daughter No 1 accused me of nerding out on this so it’s obviously a topic for a blog.

We live in an old stone house in the north of Scotland dating from around 1900. It’s a lovely house and the quality of build and materials is very good.

But so is the level of ventilation and it seems clear to us that, unlike today, people then didn’t spend a lot of time sitting around indoors expecting to be kept warm. But what we do to improve the heat retention capability of old houses like ours is, err… a hot topic just now, one which brings together the need to reduce carbon emissions, use less energy, control bills, stay warm and healthy and look after the fabric of our old homes.

Our house has a fairly standard stone construction of that era. Going from the outside in, we have a thick sandstone wall, a ventilation gap (usually at least 5cm wide) then lath and plaster forming the inside wall. Ground floors are suspended on joists with under floor vents. The whole living space is, in effect, surrounded by a ventilation envelop, going from the underfloor, behind the walls up to the loft. This means that there are not really any damp areas as the whole fabric is very ‘breathable’ meaning water vapour can easily travel through the walls and stone so there is little condensation.

But, despite the thick stone walls, it needs a lot of heat to keep it warm in the winter and is very sensitive to outside temperature changes. Having lived with this for over 20 year with just loft insulation in place, we decided it was time to do some more serious insulation retrofit, but wanted to do this in a way which doesn’t wreck the internal features or reduce the breathability of the building fabric. This is going to be a long-term project: step one is putting in underfloor insulation in the front rooms.

So here’s what I’ve done so far – and bear in mind I’m an unskilled householder albeit one who has always enjoyed construction & DIY stuff. 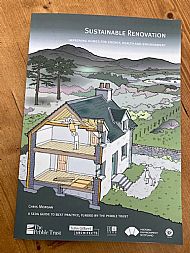 Step one was to pull out and re-read my copy of The Pebble Trusts’ Sustainable Renovation Guide which has a useful section on underfloor insulation and which I’ve sought to follow.

In a nutshell, the approach involves lifting the floorboards, laying a wind tight but breathable membrane between the joists, filling it with insulation, covering it with membrane then putting back the floorboards. There’s no crawl space so insulation could only be fitted from above.

Here’s how it’s worked in practice…. [Note: I was well aware of the location of services (cables, pipes, drains…) beforehand] 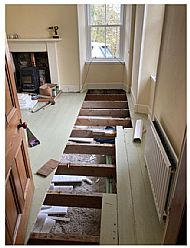 e old pine floorboards were not in a very good condition as a number had been lifted & split before and were quite gappy. But they had about 2 million old nails in them and were difficult to lift. The only way to do this was to use a long pry bar at the joists and, where possible, shorten the lengths by sawing the boards between the joists. I was hoping to re-use the boards but this proved impossible (although I’ve kept ones that were largely intact for use elsewhere). 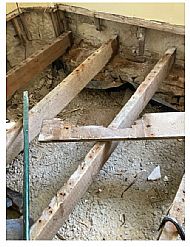 n issues. This pic shows that the wooden plates on which the joists rest were rotten in places so I replaced these where necessary. These pics show the rotten wood removed and then the joists resting on new plates underneath over damp proof strips. You can also see the lath and plaster wall construction and the lath batte

ns onto which the skirting board was fixed – all in good shape. One thing that is striking is the quality of the wood in these old houses – very solid and still fine over a 100 years later…provided it has been well ventilated.

Laying the membrane and insulation

The next step was to lay the membrane to hold the insulation. This has to be fixed onto the joists to stop it from sagging down or coming away from the joists and leaving a cold gap. The insulation could then be put in. I used ‘Thermofloc’ cellulose insulation, which is made from recycled paper. It comes in 12kg bags and needs to be broken up as it’s ‘clumpy’. I did this with a garden rake on a piece of plywood.

The next two pics show the membrane in place (including behind the skirting) and the insulation in the joists gaps. In doing it this way I’ve made sure there remains ventilation below the joists and behind the lath and plaster. 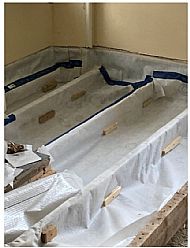 I had to remove all the old nails from the joists but other than that the joists were all good. I had a large piece of board that I stood on whilst doing this, to avoid falling between the joists and ripping off the membrane, which would have been disheartening.

Next, I laid a sheet of membrane on top then laid new floorboards (after leaving them for a couple of weeks to acclimatise). An alternative would have been to have laid OSB and then underlay & carpet.

Overall this has been relatively straightforward but quite hard work at times (such as when lifting floorboards and laying the insulation).

Unfortunately the weather has been really warm and sunny so I can’t tell yet whether it will have made any difference to the room’s heat retention….reporting on that will have to wait until winter.

Floorboard removal & installation of membrane and insulation up to the point of re-flooring took about 7 days. Installing floorboards took about 5 days. The most time-consuming & fiddly jobs were nail removal, fixing battens to hold the membrane against the joists & taping the membrane up to the lath and plaster (which involved taking off and in some cases replacing the skirting boards).

Materials and costs were as follows:

I ordered the floorboards separately:

I had to pay a further carriage charge of about £100 for the floorboards – if I had planned it a bit better I probably could have reduced that! I ordered all materials from Ecomerchant, who were prompt & efficient with delivery.

Comment from Pat Bryden at 11:21 on 15 July 2022.
This is very interesting. Several of us in 'The Colonies', B listed stone terraces, have been discussing, listening to Historic Environment and others and talking about what to do to improve insulation here.

Many of us could not do the work on our ownh, so have you any idea who to contact for local workmanship? Thank you.